Take a voyage as far north as you can go, and you’ll reach the edge of Europe – otherwise known as the wild, rocky and picturesque Malin Head. The start (or finish, depending on your point of view) of the Wild Atlantic Way, Malin Head has long been recognized for its magnificent coastline beauty, teeming wildlife and historical mysteries.

And while secluded, you’ll never feel lonely on this distant peninsula, as you’ll immediately discover the people provide a warm welcome to visitors who come to appreciate the unspoilt landscape of their home.

Malin Head, as a destination, is not a distinct town but rather a rural hinterland made up of a total of 21 townlands. Within them there are a number of smaller designated hamlets or clusters of homes. There are extremely few designated roads but they are reinforced by other distinguishing place names and features. 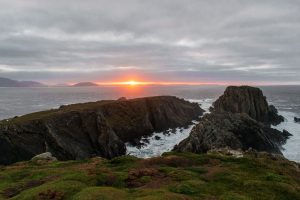 From the numerous vantage points there are views to the west of Fanad Head lighthouse (which proclaims the entrance to Lough Swilly) and beyond to Tory Island, Horn Head, Bloody Foreland and Dunaff Head.
To the northeast is Inishtrahull Island and gazing beyond in the distance, the highlands of western Scotland, and the isle of Islay may be seen on a clear day.

Malin Head is statistically the sunniest region of Ireland and also the windiest. The weather has been monitored and reported from Malin Head since 1885. The station, founded in 1955, is an essential aspect of the Irish meteorological agency Met Éireann. 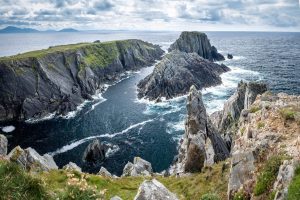 Donegal may be termed “The Forgotten County”’, but its remoteness ensures it remains a haven of untouched beauty, where wildlife thrives in pure nature. Take a boat excursion from Bunagee Pier to view a spectacular diversity of marine animals, including seals, basking sharks and even dolphins, if you’re fortunate. Or travel to Inch Fowl Reserve, a birding paradise where geese, swans, ducks and other waders assemble at panoramic lakes. And the area itself possesses its own natural treasures — Ballyhillin, a distinctive elevated beach, is widely renowned for its semi precious stones.

Walk in the footsteps of Jedi

The location scouts for Star Wars sensed a good thing when they saw it and cast this lonely gem in Star Wars: The Last Jedi. Visitors and locals alike marvelled at the Millennium Falcon sitting on the cliffs and storm troopers roaming the hills, and the cast and crew were in awe of the spectacular surroundings and kind welcome they got. They took to the neighborhood like locals, with actor Mark Hamill dropping in for refreshments at Farren’s Bar. And they fled Malin Head like everyone should – leaving no trace behind them.

Go behind the scenes to hear rare interviews with Mark Hamill, Rian Johnson and Daisy Ridley on the set of Star Wars: The Last Jedi — shot along Ireland’s Wild Atlantic Way.

On the island of Ireland you’ll discover that everywhere you go, myths and stories follow and at Malin Head this is no different. At the extreme top of the headland stands Banba’s Crown, named for Banba, the patron goddess of Ireland. And Grianán of Aileach, a beautiful stone ring fort, is associated to the fabled tribe of the Tuatha Dé Danann – worshipers of the deity Dagda, who is claimed to have ordered the construction of a stone fort to function as a burial monument to his son. Wander the landscapes of Inishowen, and you’ll encounter intriguing mythology at every step…

Picture this: a peaceful, clear evening. The sun sets below the ocean. Then, abruptly, the heavens light up with sweeping waves of brilliant pink, vivid green and piercing blue — the Aurora Borealis. Here, at the border of Europe, the Inishowen peninsula boasts virtually ideal circumstances for experiencing the phenomena that is the Northern Lights. So join stargazers, light chasers and astrophotographers on the peaceful shores of Inishowen and see the heavens come alive with colour.

History in the waves

Banba’s Crown, although a location of legend, is also closely related to history: known locally as “The Tower”, a clifftop tower was erected in 1805 as part of a network of fortresses across the Irish coast to defend against a potential French invasion. More modest are the neighboring World War II lookout stations – Malin Head was one of 83 coastal sites utilized to create a picture of wartime events around the Irish coastline. And since the seas near Malin Head contains the biggest number of U-boats in the world and the largest amount of sunken ocean going liners, tourists frequently fly here to go wreck diving and watch the drama and history lying under the waves.