Top Things To Do in Garmisch – Partenkirchen, Germany 2023

Top Things To Do in Garmisch – Partenkirchen, Germany

Garmisch-Partenkirchen, a Bavarian town, is known for leaving visitors speechless with its extraordinary beauty. It is best known for the Zugspitze, Germany’s highest peak, which towers over the city. It is a popular ski resort that is also a summer sports paradise with a variety of day trips available. Travel Pixy has compiled a list of the best sights and activities in the area for a perfect holiday in Garmisch-Partenkirchen.

Things to do in Germisch: Zugspitze

The fact that Garmisch-Partenkirchen has Germany’s highest peak (as well as a fascinating glacier) is reason enough to visit. A cogwheel train and a cable car transport you to the summit, where you can gaze out over 400 snow-capped peaks spread across four countries. The Zugspitze is a popular winter and summer sports destination, with excellent conditions for skiing, tobogganing, snow and summer hiking, paragliding, and other sports.

The Partnach Gorge, which is 703m (2,305ft) long and 80m (263ft) high, is a breathtaking natural wonder with its spraying waterfalls, rapids, and calm basins. You can fully appreciate this magnificent Alpine gorge – the starting point for the most scenic hikes in Bavaria – by taking a safe pathway across it. The Ferchenbachtal Valley, the Reintal Valley leading to Mount Zugspitze, and Mounts Eckbauer, Hausberg, and Kreuzeck are among the most popular. 12 German Myths And Legends You’ll Only Hear in Germany

Top Things to See and Do in Idar Oberstein, Germany

12 Amazing Facts About the German Language

Things to do in Germisch: Gondola rides

Gondola (aka cable car) rides over Garmisch-Partenkirchen are the best way to take in the surrounding natural beauty, and there are plenty to choose from. Take the Hausbergbahn Gondola up to the Hausberghöhe (1,338m/4,390ft), where the Kreuzwanklbahn will whisk you to the Kreuzwankln (1,550m) (5,085ft). Alternatively, take the Kreuzeckbahn from Garmisch up the 1,650-meter-high Kreuzeck (5,413ft). At 1,755m, the Wankbahn Cableway connects Partenkirchen and the Wank (5,758ft). The Eckbauerbahn departs from the Olympic Ski Stadium and transports visitors to the 1,236m Eckbauerhöhe (4,055ft).

Olympiaschanze is one of the ski-jump hills that hosted the 1936 Winter Olympics, and as such, it has historical significance as a regional symbol. It’s now famous for New Year’s ski-jumping, which is part of the Four Hills Tournament, which is held annually between Christmas and Epiphany. A tour of the jumps and museum will provide more information, not to mention spectacular views from the top of the run. You might be lucky enough to catch a training session or a special program. 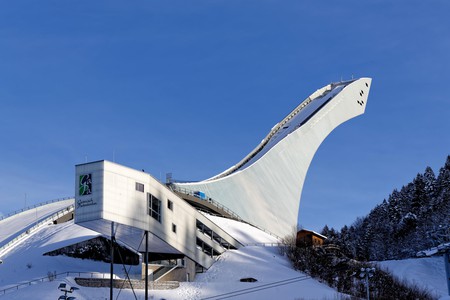 Michael Ende Kurpark (spa gardens) is dedicated to Michael Ende, a German author of children’s fiction. It is a tranquil space in the heart of Garmisch-Partenkirchen where you can immerse yourself in nature by walking barefoot on soft moss and smooth pebbles in a blissful environment of plants, flower beds, and goldfish-filled lily ponds. Children will enjoy climbing onto the turtle from The Neverending Story and navigating their way through the turf maze. Concerts are held on the park grounds on a regular basis during the summer.

Garmisch-Partenkirchen and Mittenwald in Bavaria, as well as Seefeld and Ehrwald in Tyrol, share the Wetterstein mountains. The Zugspitze is the most well-known peak in the group, but the mountains are all beautiful for climbers, trekkers, and hikers. Even if you’re not into sports, a trip to Garmisch-Partenkirchen is worthwhile for the views of the magnificent towering flanks and summits from below as you laze on a rug with a picnic. Riessersee is a stunningly beautiful Alpine lake that became famous when it hosted the skating and ice hockey events during the 1936 Winter Olympics. It’s a small body of water surrounded by the majestic Alps and dense foliage. This is the place to go for a quiet, peaceful picnic or a stroll in the midst of spectacular nature. If you get hungry, there’s a cafe on the lake’s bank, and if you want to stay longer, there’s the popular Riessersee Hotel.

In the tranquil Alpine foothills of the Zugspitze, Eibsee is as still and reflective as a mirror. It is one of the most striking sights in the region; in fact, Germans unanimously agree that it is one of Germany’s most spectacular lakes. Eibsee, which is privately owned, attracts peace-seeking tourists with its crystal-clear, emerald-green water. In the summer, it’s a popular spot for boating and scenic hikes, and in the winter, it’s a popular spot for skiing and snowboarding. Garmisch-Partenkirchen is all about breathtaking scenery that no one can get enough of. Step out onto AlpspiX and you’ll be amazed at the wonderful natural panorama of landscapes plunging away. The structure is made up of two interconnected steel beams that appear to be precariously balanced on the edge of a cliff at a height of around 1,000m (3,281ft), just above the top station of the Alpspitzbahn lifts.

Welcome to the Alps as you’ve never seen them before: a vast swath of 21,000ha (51,892-acre) of rugged limestone peaks looming over a gem-blue glacial lake. What’s the best part? You’ll have it almost entirely to yourself. Except for the architectural glass box that is the National Park Centre and the onsite rangers who lead tours, you’re pretty much guaranteed to enjoy the jaw-dropping fairytale views of sparkling lakes, cloud-scraping peaks, and a patchwork of Alpine pastures without seeing another soul. Keep an eye out for golden eagles, horned ibex, and a variety of butterfly species that pollinate wild orchids. Skiing isn’t the only way to speed down the side of a mountain. You can also ride this thrilling, self-controlled ride that can reach speeds of up to 40kph (25mph) and resembles a cross between a rollercoaster and a toboggan. A 2.6km (1.6mi) track winds down the side of the Kolbensattel mountain, where two-seater carts await your arrival. Whizzing through patches of Alpine forest while admiring the valley’s magnificent views is an adrenaline rush you’ll want to repeat as soon as you reach the bottom.

See also  Is Munich Worth Visiting? 10 Reasons to Visit Munich at Least Once in Your Lifetime

This snow-covered ski resort is a stunner, comprised of three formidable mountains: Hausberg, Kreuzeck, and Alpspitze. Furthermore, it is appropriate for skiers of all skill levels. Families and those with less experience can practice their technique on the Hausberg’s mostly easy-to-moderate runs. Meanwhile, more advanced skiers can take on the difficult red and black runs. You’ll be ready for a slope-side break by lunchtime, so head to the ski hut Drehmöser 9, which has a fantastic à-la-carte restaurant; or, if you prefer something more casual, there’s the rustic Garmischer Haus next door. This is one of Germany’s most beautiful lakes, located in the foothills of the Bavarian Alps. The trees that surround the shores are frosted white with snow in the winter; in the autumn, everything is ablaze with red, gold, and burnt-orange hues; but the best time to visit the waters is between mid and late spring, when the water temperatures are rising and blossoms are everywhere, including the little islands that dot the middle of the lake like living barges. 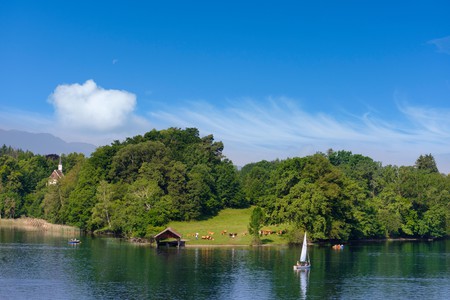 This royal Schloss (castle), built between 1863 and 1886 near the village of Ettal, is a magical place to spend an afternoon wandering around. The property is a riot of rococo frills, gold, gilt, and show-stopping fountains, much like a miniature Versailles. It is surrounded by formal gardens that are divided into five sections and decorated with sculptures representing the continents, seasons, and elements. One of the most impressive installations is the Venus Grotto, a man-made cave designed to resemble Capri’s Blue Grotto, into which King Ludwig used to sail his golden swan boat. Topic: Top Things To Do in Garmisch – Partenkirchen, Germany

Become a member of Our Community on Facebook “Amazing Germany Group”. A place where members open up to one another, share their stories, travel photos, and experience a different way to travel Germany – together.

12 German Myths And Legends You’ll Only Hear in Germany

Top Things to See and Do in Idar Oberstein, Germany

12 Amazing Facts About the German Language

What to Do, Where to Go and Places To Eat In Dublin? 48 Hours in Dublin